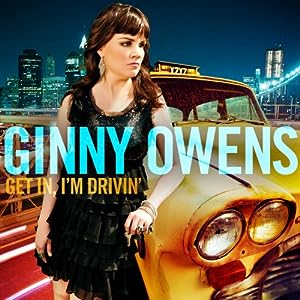 The CD starts with the familiar ding of the key in the ignition. The engine roars to life and we are off.
Get in, I’m driving . . .
Soulful, bluesy, hard to nail down. Ginny Owens.
A beautiful voice, great to pop in when you need to unwind. She has some more upbeat songs, but I loved the soothing sound of her music. Of course, if my kids had to pick, they would say they loved the songs with the drums calling out as they danced around the room. Something for everyone, I suppose. Many of the songs draw on the sound of the keyboard and her voice. Highlighting the words and the music, not the rhythm and background instruments.
Lovely, pure music. Eleven songs, each unique and enjoyable.
A little bit about Ginny:

A three-time Dove Award winner, including the Gospel Music Association’s 2000 New Artist of the Year recipient, and multiple ASCAP Award winner, Ginny Owens has sold nearly one million albums. A top performer on the Christian radio charts with hits like “If You Want Me To,” “Free” and “I Wanna Be Moved,” among others, Owens’ music has impacted mainstream audiences at Lilith Fair, the Sundance Film Festival and the White House. Her music has received widespread film and television placement, including songs on the popular WB series’ “Roswell” and “Felicity.” Owens was featured on national television, including NBC’s “Today” and CNN, for her contribution to help rebuild New Orleans following Hurricane Katrina.

Born and raised in Jackson, Miss., Owens was discovering melodies on the piano almost before she could complete a sentence. Songs began to emerge from her fingers as the vision began to leave her eyes and by the age of three.  A degenerative eye condition left Owens completely blind.  Despite her physical challenge, Owens pursued a music career.  Songs provide a window into a world Owens can’t see and an outlet for her to express her thoughts and dreams. Owens’ unique musical style and inspirational lyrics continue to appeal to Christian and mainstream audiences alike.

In 2005 Owens launched The Fingerprint Initiative, a hands-on, non-profit organization designed to “bring hope to the world, one project and one touch at a time.” The organization has partnered with  and raised money for groups such as Compassion International, International Justice Mission and Habitat for Humanity.

You can find hes brand-spankin’ new CD in stores and online starting today and it would be a great addition to any CD collection.
Lots of ways to check out Ginny and her new album:
Website: http://ginnyowensmusic.com/
Facebook: http://www.facebook.com/GinnyOwensMusic
Twitter: http://twitter.com/#!/GinnyOwens
iTunes: http://itunes.apple.com/us/album/before-you-fly-single/id442050145
And, a GIVEAWAY!!! If you would like to win a copy of the CD for your very own, please leave a comment with you name and email address so I can get in touch with you if you win.
You can get additional entries by following this site, or sharing about this contest elsewhere (blog, facebook, twitter, etc.) Just come back and comment for each of those items that you do.
Contest will run through this week and close on Saturday in the evening. Can’t wait to get this into your hands.

Disclosure of Material Connection: I received one or more of the products or services
mentioned above for free in the hope that I would mention it on my blog. Regardless, I
only recommend products or services I use personally and believe will be good for my readers.
I am disclosing this in accordance with the Federal Trade Commission’s 16 CFR, Part 255:
“Guides Concerning the Use of Endorsements and Testimonials in Advertising.